Can you help with our history?

One lesser-known aspect of Montrose’s proud history is the weekly art and craft classes that were conducted through the mid-1930s to the mid-1940s. During this time, dozens of students learned the art of pottery making, leather work and raffia work, even winning awards for their efforts.

In 2012, Griffith University received a generous donation of over 200 ceramics produced in Queensland from former curator and decorative arts scholar Glenn Cooke. Included in the donation are a handful of pieces produced at Montrose, namely a handled tray by Hazel Koplick, a jug by J Wilson, and a lidded box by unknown artist IPL. The inclusion of pieces made at Montrose in this donation speaks volumes about how art and craft were embraced by Queenslanders.

Pottery classes were taught at Montrose on Monday afternoons by volunteers from the Arts and Crafts Society of Queensland from the latter months of 1934 until at least 1946. Several ladies who had trained with LJ Harvey served as pottery instructors, namely Dorothy Julian, Edith White, Mrs WJ Williamson, Nell McCullough, Grace Harris, Val McMaster and Edith Ruhning. Pottery techniques took inspiration from LJ Harvey’s exercises; a photograph in a 1935 edition of The Brisbane Telegraph shows students with examples of tobacco jars, honey jars, and concave sided vases, as well as ashtrays and a teapot.[i] 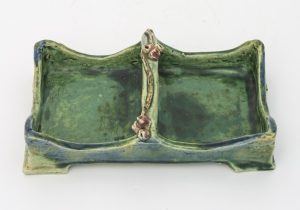 Examples of work produced at Montrose were displayed as early as 1935 in the Arts and Craft Society of Queensland’s annual exhibition, and were sold in Montrose fetes. Student’s work was also presented at the RNA exhibitions from 1936.[ii] Arts and crafts classes continued at Montrose into the mid-1940s; students produced ashtrays for Brisbane military hospitals in 1942, the children of Montrose presented a piece of pottery to Helene Kirsova following a performance by the Kirsova ballet in Brisbane in 1944, and Montrose work was displayed at the Arts and Crafts Society of Queensland exhibition in 1946.[iii] Currently, it is unknown whether the classes were held after 1946 – around this time, Grace Harris, then President of the Arts and Crafts Society publicly lobbied to have a full-time instructor employed.[iv] 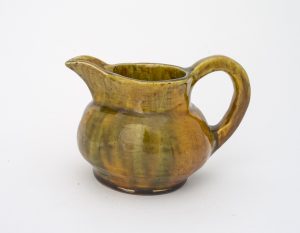 Griffith University are currently undertaking further research into the work that students at Montrose completed, and are especially keen to learn more about students’ experiences in their classes. If you have any information that you would like to share, please contact Tim Roberts at tim.roberts@griffith.edu.au.

SUPPORT CHILDREN AND YOUNG PEOPLE WITH A DISABILITY IN QUEENSLAND.