A legacy of caring 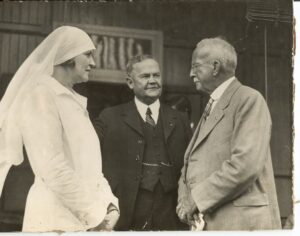 Last week, George Marchant was inducted into the State Library of Queensland Hall of Fame as one of Queensland’s most successful businessmen and one of our most generous philanthropists. Here at our Darra Headquarters, the boardroom is known as the Marchant Room and there are many more connections in our history. When Montrose (known then as The Queensland Society for Crippled Children) first opened in 1933, it was largely made possible by the generosity of George Marchant.

Born in 1857 in England, Mr Marchant set sail for Australia at the age of 16, landing in Brisbane with only a few shillings in his pocket. He ended up working in a Brisbane aerated-waters factory as a carter. The factory was an inspiration to Mr Marchant, and in 1886 he bought a similar small business.

Mr Marchant’s soft drink factory was extremely successful and grew to be one of the largest businesses of its kind in Australia. Factories were opened in Sydney, Melbourne, Adelaide, Newcastle and Brisbane. As well as operating such a successful company, Mr Marchant also invented and patented a bottling machine, which was later used all over the world.

In the early 1930s, Mr Marchant donated his own home at Taringa to The Queensland Society for Crippled Children as our first residence. The building was known as Montrose and that name has endured throughout our history in various forms. Due to the extent of the Poliomyelitis epidemic and resulting growth in client numbers, Mr Marchant bought a much larger site at Corinda in 1937 as a gift to the organisation. The “Montrose Home” was then able to provide accommodation for 90 children with multiple services available including long-term accommodation, schooling, dental treatment and even a barber!

When Mr Marchant died in 1941, his commitment to us was evident, as he bequeathed a significant donation and the remainder of his estate to the organisation.

Over the years, the services we provide and our locations have changed but helping children with a disability has remained central to what we do and we are delighted to see George Marchant’s role recognised.

For more, watch this interview with Montrose historian Helen Gregory about Mr Marchant from the State Library: